Safe sex traditionally refers to sexual intercourse that includes the use of barrier protection such as condoms or dams to prevent the spread of disease. This implies that disease transmission is the only risk present during sex.

Discussion of emotional risks, legal risks (such as sexual intercourse with an underage person) consent and sex whilst intoxicated should also factor into this conversation. Young people whose early sexual experiences have been abusive will need extra support (including counseling) to help them re-establish their own sense of safety around sex. (Consider specialist referral e.g. Centre Against Sexual Assault)

Condoms prevent the transmission of the majority of STI’s, if the condom is in place throughout all sexual acts, not just vaginal penetration. Embarrassment about not applying a condom properly in the heat of the moment can be a major barrier to young people using them. Supply young people with more condoms than they will possibly use and encourage them to practice when they don’t have the pressure of a partner to worry about. Women who have sex with women can apply condoms to shared sex toys to reduce STI transmission.

Dams are a flat square of latex that can be used as barrier during oral sex (oral/ vaginal sex or oral/anal sex). Dams can purchased or young people can cut off the tip and base of the condom and cut down the length of the tube. This method is useful in decreasing the risk of transmission of STI’s though not widely practiced. 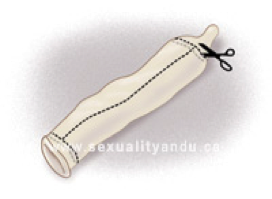