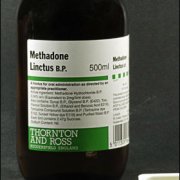 Methadone is a potent synthetic opioid agonist which is well absorbed orally and has a long, although variable plasma half life. The effects of methadone are qualitatively similar to morphine and other opioids.

Most people who have used heroin will experience few side effects from methadone. Once on a stable dose, tolerance develops until cognitive skills and attention are not impaired. Symptoms of constipation, sexual dysfunction and occasionally increased sweating can continue to be troubling for the duration of Methadone maintenance treatment.

Methadone is fat soluble and binds to a range of body tissues including the lungs, kidneys, liver and spleen such that the concentration of methadone in these organs is much higher than in blood. There is then a fairly slow transfer of methadone between these stores and the blood. Because of its good oral bioavailability and long half life, methadone is taken in an oral daily dose.

Methadone is primarily broken down in the liver via the cytochrome P450 enzyme system.

Approximately 10% of methadone administered orally is eliminated unchanged. The rest is metabolised and the (mainly inactive) metabolites are eliminated in the urine and faeces. Methadone is also secreted in sweat and saliva.

Source: Clinical Guidelines and Procedures for the Use of Methadone in the Maintenance Treatment of Opioid Dependence

Potential side effects & risks (including overdose)

Risk of relapse
Longer duration and greater intensity of pre-treatment opioid use is associated with an increased probability of relapse to opioid use after leaving treatment.

The likelihood of a person maintaining abstinence after leaving treatment is increased in people who have established drug-free social supports, are in stable family situations, employed, and with good psychological strengths.

From: Clinical Guidelines and Procedures for the Use of Methadone in the Maintenance Treatment of  Opioid Dependence

Ceasing or withdrawing from treatment

 It is recommended that people be encouraged to remain in treatment for at least 12 months to achieve enduring lifestyle changes.