Introduction to Drugs & their effects

This module is concerned with psychoactive drugs, defined by the World Health Organisation as ‘a chemical entity used non-medically, self-administered for its psychoactive effect’ (Hamilton & Cape in Hulse et al, 2002:4).

Find detailed infomation about each drug in the Drug Information section.

Psychoactive drugs may be classified or categorised in a number of ways, either according to their origin, chemical structure, legal status or therapeutic uses.

In the health sector, the mechanisms of action of the various drugs, their impact on physiology and behaviour and how this ultimately affects use in terms of positive and negative consequences is examined (Hamilton et al, 2002).

While this module focuses on the effects of drugs, practitioners should also consider the effects on behaviour resulting from a young person being hung-over, coming-down or withdrawing from substances. 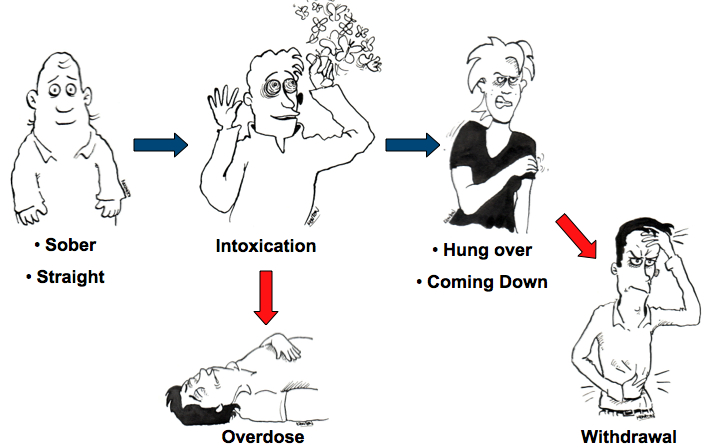 While it is possible to classify drugs by the effect they have on behaviour, this can be misleading.  Our experience of a drug is influenced not only by the physiological effect of the drug on our body (usually the brain), but also by our expectations of the drug and the situation we use it in.  The effects of a drug are thus not just the intrinsic property of the drug itself.  Some drugs have several types of effects while others are unique in their properties.  Some have a sedating effect on brain function but this might be experienced in mood and behaviour as stimulating or disinhibiting (Hamilton et al, 2002:5).

Below is a framework that classifies drugs according to their physiological effects and the effects they have on the Central Nervous System (CNS).