The Pharmacological model is based on a belief that particular substances have an inherent power or attraction that is capable of overwhelming the will of individuals, communities and even societies.

Drug users, particularly those with problems, are again portrayed as hapless victims but this time the drug and the power of its intoxication effects are to blame. To describe this view, Dr Alex Wodak, from St Vincent’s Hospital in Sydney coined the term ‘pharmacological fundamentalism’. As with the moral view, the pharmacological view discounts the vast array of personal, interpersonal and structural factors that contribute to and continually influence a person’s drug using behaviour. Ironically, this belief provides a person who has drug problems with an excuse for not taking responsibility for themselves and their actions. This can restrain a person from gaining a deeper insight into the true nature of their problem with drugs.

There are a number of myths perpetuated by pharmacological fundamentalism including:

It is easy to see how those who have close and significant relationships with people involved in problematic drug use might attribute all negative changes and destructive behaviour to the power of the substance being used.

This can lead to families taking desperate measures, sometimes investing significant funds on the promise of a miracle cure. It is true that a person who can achieve and maintain abstinence after dependency on a drug, will most often experience real improvements in their health status but the process of recovery is more complicated than simply ‘getting the drug out of ones system’. 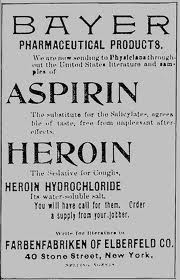 This poster advertising heroin from early in the 20th Century shows how the charactisation of one drug has fluxuated over time. At this time heroin was available over the counter at chemists in cough medicines and prescribed by medical practitioners to assist in childbirth and palliative care.

What is possibly even more interesting is the fact that prior to its prohibition by the Australian Federal Government in 1953, more heroin was consumed per head in Australia than any other country in the world.  On Thursday 30 December, the Sydney Morning Herald reports that in 1952 Australians consumed 2.85kg per million head of population as compared to the UK and Finland, consuming 1.79kg and 1.98kg per million, respectively.  Yet at the time, heroin addiction and the related negative social impact was virtually non-existent.