Drug use can be legal or illegal, high or low risk and beneficial or problematic depending on the circumstances.

Controlled use is considered sufficiently temperate to avoid harmful intoxication or dangerous use and the development of problematic dependence on a substance or substances.

Hazardous use refers drug use that puts ones safety and health in jeopardy.  This can include:

The UN (1997) also makes a distinction between first use and subsequent use.

First use is always experimental in the sense that a person is experiencing the effects of the drug for the first time.

Experimentation may involve only a single exposure to a drug’s effects. It may also involve several exposures, most often over the short term. Through experimentation a person might decide that the drug does not suit them and choose not to continue. Others who decide to continue using will adopt a pattern of use that works for them. People drug use patterns often change with time and circumstance and as tolerance to drug effects develop. Some people’s pattern of use develops beyond their control.

A range of substance use patterns, drawn from a number of sources (YSAS, 2001; Denning et al., 2004; Shafer, 1973), are represented in the following ‘continuum of usage patterns’.

Non Use
People choose not to use drugs for a number of reasons.  Some of these reasons relate to religion, culture or health.  In rare cases even non-use can be a very risky choice when drug use is required for “medical/therapeutic” purposes.

First Use
Experimental use: All people who use substances will go through a period of experimentation.  This process will determine how and if a person will use the drug subsequently (YSAS 2002).

Occasional use: This form of drug use is often circumstantial.  For example, a person may only drink alcohol at social functions or may only take paracetamol when they have a headache.  The more problematic form of occasional use would be binge style use, which can be quite intensive in short periods or bursts.  This too, is most often circumstantial (YSAS 2002).

Regular social/recreational use: A person who uses drugs on a regular basis may or may not experience problems. Social/recreational use is likely to feature the least opportunity for harm. Regular, controlled users of drugs are not considered to be dependent on their drug of choice as they have the ability to moderate or change their use as circumstances dictate (YSAS 2002).

Regular intensive use: There is no standardised method of categorising use as intensive or heavy. It depends on a range of factors including health and the norms of one’s group or culture.  People can consume large amounts of substances on a regular basis in a controlled way, without developing dependence. Alternatively this form of regular use can be hazardous and meet the criteria for ‘substance abuse’ (see DSM IV and ICD-10 classification)

Dependent use: Some people come to depend or rely on one or more drugs in order to function and manage their circumstances.  People can be dependent on a drug and manage without problems occurring or engaging in high-risk behaviour.  If a person’s drug use does begin to impinge on other areas of their life such as family or work and the person is unable to change or moderate their use, they would be thought of as being dependent on that drug (see DSM IV and ICD-10 classification)

Figure 1 demonstrates how subsequent use will vary depending on the circumstances of each individual.  People may move from one type of use to another. 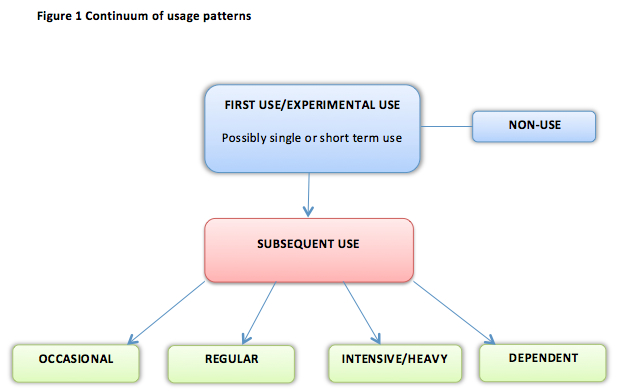 A definite diagnosis of dependence should usually be made only if three or more of the following have been present together at some time during the previous year:

(a) a strong desire or sense of compulsion to take the substance;

(b) difficulties in controlling substance-taking behaviour in terms of its onset,

termination, or levels of use;

(c) a physiological withdrawal state (see F1x.3 and F1x.4) when substance use has ceased or been reduced, as evidenced by: the characteristic withdrawal syndrome for the substance; or use of the same (or a closely related) substance with the intention of relieving or avoiding withdrawal symptoms;

(d) evidence of tolerance, such that increased doses of the psychoactive substances are required in order to achieve effects originally produced by lower doses (clear examples of this are found in alcohol- and opiate-dependent individuals who may take daily doses sufficient to incapacitate or kill nontolerant users);

(e) progressive neglect of alternative pleasures or interests because of psychoactive substance use, increased amount of time necessary to obtain or take the substance or to recover from its effects;

(f) persisting with substance use despite clear evidence of overtly harmful consequences, such as harm to the liver through excessive drinking, depressive mood states consequent to periods of heavy substance use, or drug-related impairment of cognitive functioning; efforts should be made to determine that the user was actually, or could be expected to be, aware of the nature and extent of the harm.

Narrowing of the personal repertoire of patterns of psychoactive substance use has also been described as a characteristic feature (e.g. a tendency to drink alcoholic drinks in the same way on weekdays and weekends, regardless of social constraints that determine appropriate drinking behaviour).

It is an essential characteristic of the dependence syndrome that either psychoactive substance taking or a desire to take a particular substance should be present; the subjective awareness of compulsion to use drugs is most commonly seen during attempts to stop or control substance use. This diagnostic requirement would exclude, for instance, surgical patients given opioid drugs for the relief of pain, who may show signs of an opioid withdrawal state when drugs are not given but who have no desire to continue taking drugs.

DSM‐IV‐TR Criteria for Substance Dependence
A maladaptive pattern of substance use, leading to clinically significant impairment or distress, as manifested by three (or more) of the following, occurring at any time in the same 12‐month period (emphasis ours):

1. Tolerance, as defined by either of the following:

2. Withdrawal, as manifested by either of the following:

3. The substance is often taken in larger amounts or over a longer period than was intended

4. There is a persistent desire or unsuccessful efforts to cut down or control substance use

6. Important social, occupational, or recreational activities are given up or reduced because of substance use

Criteria for Substance Abuse
A maladaptive pattern of substance use leading to clinically significant impairment or distress, as manifested by one (or more) of the following, occurring within a 12‐month period: