The ‘moral model’ holds that the root cause of problematic AOD use is an individual’s inherent moral weakness and lack of will power. This view has also been applied to particular communities and even races of people. There is no evidence for the perspective. Moralism of this kind is often associated with the notion that substance use and ‘addiction’ is a sinful or evil (see ‘grand theories above).

Drug users are characterised as ‘misfits’, ‘no-hopers’, or as objects of pity, whereas dealers are routinely described as ‘scum’, ‘vermin’ or ‘an evil menace’.  Within this wholly manufactured dichotomy, users [consumers] are assigned the role of helpless victims, dealers [retailers] that of vicious predators. Such descriptions ignore the fact that a using career that did not at some point involve the purchasing and or selling of drugs for profit would be the exception not the rule and that these roles are interchangeable and complementary. Perhaps most concerning is the propagation of beliefs like ‘Once a junkie, always a junkie’ goes the adage. The suggestion is that nothing much can be done to help people with drug problems and perhaps more concerning is that people with drug problems might internalise this view. 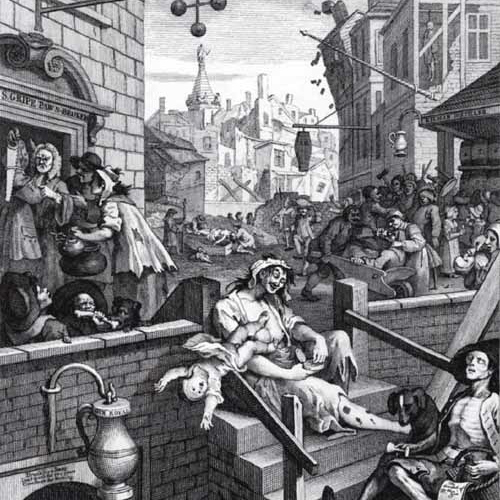 An example of the moral model from British history

William of Orange, the Dutch consort to England’s Queen Mary, banned imports of French brandy and levied a duty on German spirits, thereby creating a market for Dutch Gin in 1689.

In 1695, British beer taxes were raised making ‘Dutch Courage’ the cheapest available intoxicant.  By 1720, ‘gin madness’ was endemic among the poor who sought relief from their increasingly brutal and alienated lives.

Arguably societies that favour structural inequality and uneven access to resources are unlikely to develop a discourse critical of social inequality.  Blaming drunkenness [and other social problems such as poverty, homelessness and child neglect] on the inherent moral weakness [or sinfulness] of the poor was popular right through to the end of the Victorian era.  Cyril Pearl has described this view as the “…keystone of the respectable Victorian’s moral structure. In fulminating about the wickedness of the individual he was able to forget about the wickedness of society; ‘More Prayers’ was a much safer slogan than ‘Less Poverty’” (Pearl, 1955; p.62).

Linking drug use and addiction with ‘sinfulness’ runs in an unbroken thread from Hogarth’s time to our own.

Major Brian Matters from the Sydney based Eastern Command of the Salvation Army is the former chair of the Australian National Council on Drugs Drug Advisory Council and has been since its inception. His belief that addiction is sinful is summed up by his comments in Melbourne’s, Age newspaper on 5 January 2000:

“I believe addiction is a sin.  I know it’s a medical and psychological problem, but the Bible tells us that sin is falling short of our potential.  It tells us we should not be mastered by things.  It also tells us to keep the body pure as it is the temple of the Holy Spirit.”

A person whose drug use is problematic, who feels that they are inherently bad or worthless will, in most cases, have no difficulty in finding supporting evidence to confirm this view.  This reinforces the tendency of many people with drug problems toward self-blame, self-hatred and a sense of extreme powerlessness.  These beliefs can create ‘learned helplessness’ and work against the prospect of genuine change by diminishing motivation and related labels can be used at times by to avoid taking responsibility for their actions.