Staged or ‘building block’ theories
Several  ‘staged’ or ‘building block’ theories of human development were  generated in the mid-twentieth century. Included in this group of theories are Havighurst’s ‘developmental task theory’, Erikson’s theory of ‘psychosocial’ development, Piaget’s  cognitive development theory (in Gruber & Voneche, 1977), and Kohlberg’s (1981) theory of ‘moral reasoning’. The conceptual basis of these  theories is that development is a stepwise progression through stages, with  movement to each  new  stage  dependent on successfully completing tasks in the previous stage.

Contemporary research in the social sciences, psychology and neuroscience has demonstrated that development is continuous rather  than  staged, and that it varies according to socio-cultural and environmental influences. While  the relevance of these  once-dominant theories has diminished, they have nevertheless contributed much to current theory.

In developmental task theory, Havighurst (1972) identified six age-specific life stages  covering birth  to old age, each  with  a discrete set of developmental tasks. For Havighurst, developmental tasks derived from physical  maturation, personal values and the pressures of society. The tasks identified by Havighurst for the adolescent period (13 to 18 years old) included acceptance of one’s  physique; adopting a set of values and an ethical  system  as a guide  to behaviour; developing healthy attitudes towards the self as well as social groups and institutions; developing new  and more  mature relations with  age mates  of both  sexes; settling  on an appropriate social role and selecting an occupation; and achieving emotional independence from  parents and other  adults.

The notion that mastery of developmental tasks leads to healthy adjustment still has much salience  today. However, Havighurst’s conception of typical  age-graded stages  no longer fits with  contemporary evidence, which demonstrates considerable variation in the developmental trajectories of individuals across  the life course.

Like Havighurst, Erikson’s model of Psycho-Social Development (Erikson, 1968)  contained several  stages with  discrete tasks. Erikson  believes  that the critical task of adolescent development (teens  to age 20) is to differentiate from  family  of origin/society. This process of individuation involved  resolving the ‘identity crisis’, the main  question being  ‘Who am I?’ Erikson’s ideas have been  extremely influential and,  as such, adolescence is commonly understood as a time  of self-exploration. Research has confirmed that as adolescents develop, they evolve  more  abstract characterisations of themselves and self concepts become more  differentiated and better organised (Steinberg & Morris, 2001).

However, research has not supported Erikson’s timetable for development. The tasks within  some  of his stages  have been  criticised for being  based  more on speculation than  evidence. Further, it is now  argued that only a small minority of young people experience the kind of identity crisis described by Erikson.

Cognitive Development Theory, originated by Swiss psychologist and natural  scientist  Jean Piaget  (1977), a contemporary of Erikson, identified four developmental stages.  His work  was particularly influential throughout the second half of the twentieth century. Piaget  used  rigorous observational research methods to fully develop his theory, but empirical studies of cognitive development, now  based  more on information processing and computational models, have brought many  of his basic propositions into doubt (Steinberg & Morris, 2001).

Even so, still relevant is Piaget’s  observation that as children transition to adolescence their cognitions develop from  “concrete operational thought” (logical but black-and-white or concrete thinking) to formal operational thought (increased ability to think abstractly, beyond the here-and-now, and to better understand the perspectives of others).

American psychologist Lawrence Kohlberg concentrated on the development of logic and morality. His model is based  on moral  reasoning. Six constructive stages  are proposed, each  more  effective at responding to moral dilemmas than  its predecessor (Kohlberg, 1981).

The six stages  are identified in Table 2. 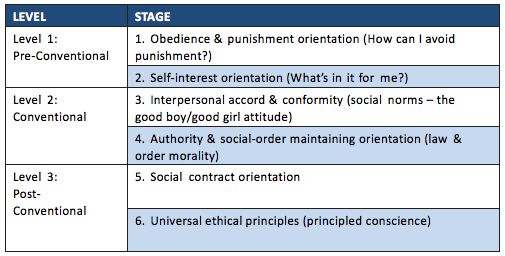 Jonathan Haidt  (2007) has made an incisive critique of Kohlberg’s theory, demonstrating that moral  action is based  more  on intuition and unconscious processes than  reasoning. Gilligan (1982) also points  out that the theory is not culturally neutral and is based  on research with  male  participants. She explains that where Kohlberg’s focus  is on justice,  other  models might equally focus  on the ethics  of caring.

Ecological and experiential theories
Developmental Systems Theory (DST)  makes  individual- context relations the basic unit of analysis  and the focus of intervention (Silberstein & Lerner, 2007). Emphasis is on understanding how  each  young person’s unique experiences within  their social ecology shape  their development.

DST  emphasises the diversity  of human development and strong evidence is posited for ‘plasticity’ in human developmental processes. This means  that regardless of past experience, there  is always  potential for change and reason  for optimism – a view that is commensurate with  both  progressive neuroscience and contemporary social science perspectives.

DST  demonstrates how  the promotion of positive human development can be achieved by aligning the strengths and potentials of individuals and contexts. Biological and psychological processes and developmental milestones, so often  viewed as predetermined and fixed,  are demonstrated to be dynamic and subject to socio-cultural and historical influences. DST  provides a sound scientific framework for understanding how  multiple factors work  together to shape  human development. In this way, DST  provides for the complexity of young people’s developmental experience to be captured and understood.

DST  evolved from  Ecological Systems Theory (EST), which was developed by Urie Bronfenbrenner (1979). EST is also known as ‘development in context’ or ‘human ecology’ theory. EST holds  that everything in a child or young person’s environment affects how  he or she grows and develops. Development is viewed as a continuous process and the idea of discrete stages or building blocks  is not supported. Bronfenbrenner specifies four  types  of integrated environmental systems, each  with  their own  roles,  norms and rules that can powerfully shape  development.

Each young person’s interactions with  people and within  systems are ecologically shaped, but equally, how he or she acts or reacts  affects the response of people and systems. This brings  each  young person’s special  genetic and biologically influenced personality traits (temperament) into the developmental equation.

Another seminal (but little known) theory that considered development as context dependent is Cultural History Theory, developed by Lev Vygotsky (1978). Vygotsky was a pioneering development scientist working in the former Soviet  Union, whose recognition has not matched his influence on later developmental theorists. His work predates and foreshadows Social Learning Theory.

Cultural History Theory holds that development is a continuous process whereby children and young people learn through hands-on experience. Development is believed to be best facilitated by adults, who through being connected with  the child or young person are available  to provide timely  and sensitive  intervention when they are on the edge  of learning a new  task. This is known as the ‘zone of proximal development’.

Vygotsky introduced the concept of ‘scaffolding’ to represent how  the knowledge children already  have can be built upon by supportive and available  adults. Scaffolding has become a widely used  construct in resilience research and in the provision of youth  services more  generally.

Albert Bandura’s seminal work,  Social Learning Theory (1977), also demonstrates the importance of social experience and observational learning for young people. Social Learning Theory emphasises that opportunities for modelling, imitation and identification through interaction with significant others  within one’s  environment is critical for human learning and development.

Social Learning Theory also makes paramount the role of reward and punishment. Bandura introduced the concept of self-efficacy – a person’s own  judgment of how  well he or she can execute courses of action required to deal with  prospective situations – which is central  to the study  of resilience and health  behaviour change.

Attachment Theory is another with profound implications for how  development is understood and nurtured. It was formulated by British psychiatrist and psychologist John  Bowlby and further developed by American developmental psychologist Mary  Ainsworth (see Bretherton, 1992).

Bowlby’s original  theory held that human infants  need a secure relationship with  adult  caregivers, without which normal social and emotional development will not occur. Ainsworth added the concept of the ‘secure base’ that is instilled  through the nurturing provided by a loving  parent, particularly a mother. She also identified several  ‘attachment patterns’ that guide  the individual’s feelings, thoughts and expectations in later relationships (Vaugh et al., 2008).

Early conceptualisations of Attachment Theory were viewed as too deterministic, with  development now demonstrated to be subject to more  varied  social processes. A further criticism is levelled  by Kagan (1994), who  rejects  the notion that the bond between caregiver and infant  is crucially  influential in later emotional and even intellectual growth. Kagan demonstrates that temperament is a strong predictor of behavioural and emotional reactions that appear early and are influenced in part by genetic constitution. Subsequent research demonstrated that it is the caregiver’s behaviours that form  the child’s  attachment style, although how  this style is expressed may differ with  temperament (see Bretherton, 1992).

Further empirical studies  have supported the role of early and ongoing attachment in shaping development. Robinson and Miller (2010) explain  that the attachment system, including the secure base provided by an emotionally supportive, warm  and communicative relationship with parents and/or caregivers, has an integral role to play in helping children and young people develop autonomy and identity.