Self-awareness is the foundation of good communication including assertiveness and other social skills. Self-awareness begins with understanding the relationships between one’s own thoughts, feelings and behaviours (TFB circle), followed by the regular use of data gathering techniques such as listening to self-talk, observation of one’s thoughts, feelings and behaviours, imagination, and remembering past experiences. 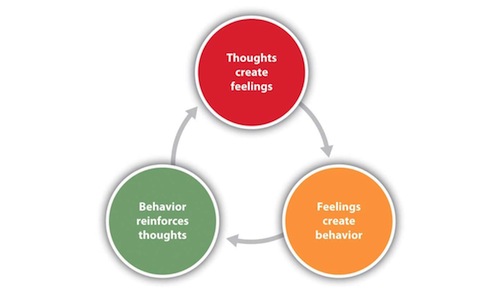 Key instructive techniques used by practitioners to help clients develop self-awareness include: (i) explanation of the thoughts, feelings and behaviours (TFB) circle, and (ii) guided self-discovery or Socratic questioning in order to bring information to awareness and promote reflection and questioning of automatic thoughts and assumptions (Neenan & Dryden, 2004).

Feedback around self-awareness will largely involve positive reinforcement for active participation in practice, and affirmation as evidence of increased insight is demonstrated.

Independent practice in the real world can begin with the client attending to thoughts, feelings and behaviours that occur outside of the therapeutic setting. Homework assignments such as thought and feeling diaries are commonly used (Bedell & Lennox, 1997; p74).

Rather than thought and feeling diaries, creative expression such as painting, taking photos or recording performance of a song or video could be useful alternative ways for young people to practice awareness of thoughts and feelings.

Be aware that psychoactive substances have profound effects upon perceptual processes like self-awareness. They can exacerbate cognitive distortions and contribute to symptoms such as paranoia.

Unless otherwise stated these notes are based on (Bedell & Lennox, 1997: Chapter 2).

Note C2i Such imbalances in attention are known as information processing biases.