All young people are vulnerable to disruptions and challenges that make developmental tasks difficult to achieve. In Victoria, the State Government’s Vulnerable Youth Framework (VYF) (2008) makes it clear that for the bulk of Victorian young people such vulnerability “…is managed through family, recreational, social and cultural support” (p12). Most young people negotiate adolescence successfully with relatively few problems. However:

“Vulnerability becomes problematic when negative behaviours or experiences multiply and there are few or no supports in place to assist young people [who….] confront issues that they do not have the skills, knowledge or support to get through” (p12).

The VYF identifies four layers or levels of vulnerability (see Figure 2.1). While the categories are theoretically arbitrary and no consideration is given to the moderating influence of protective factors, the framework could be a useful conceptual tool for youth AOD practitioners. 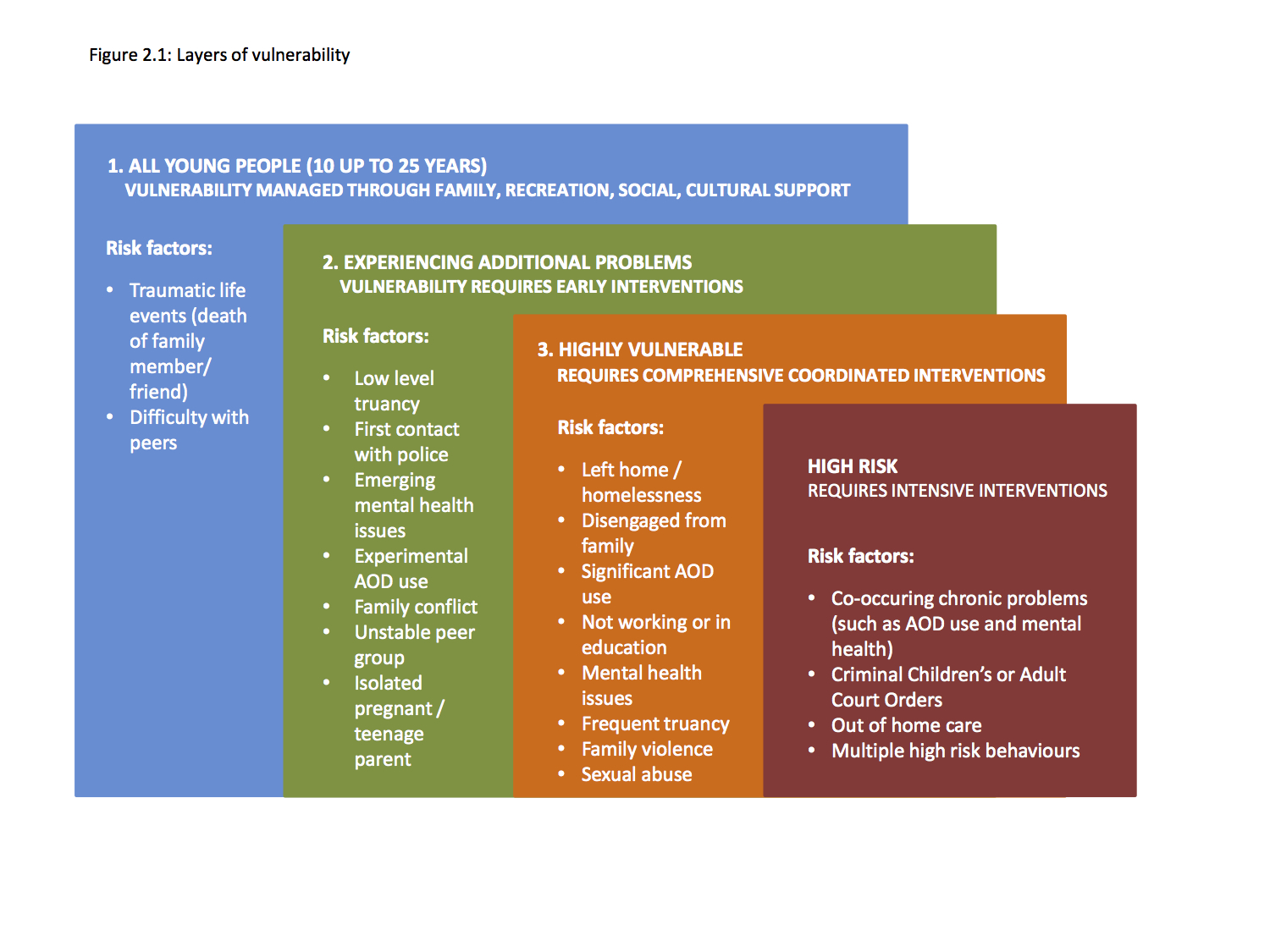 The emergence of problems in adaptive function is strongly associated with the accumulation of risks and adverse experiences, particularly in a concentrated time frame (Masten & Obradovi, 2006). Adversity seems to be most debilitating when it comes in multiple forms (Gilligan, 2008). Further, the timing of adversity has also been found to have an impact, particularly when occurring at critical periods of development (Masten & O’Dougherty Wright, 2009). Gilligan (2008) adds that:

“…young people may be able to cope with one or two fairly serious adversities in their lives, but as the number of adversities rises to three, four or beyond, they may begin to buckle under the strain” (p38).

He draws from the work of Rutter (1990) to show that reducing the number of problem areas in the life of a child or young person (even by one) may have a disproportionate and decisive positive impact in terms of reducing the risk of later problems.

Masten and O’Dougherty Wright (2009) report that models focusing on the related concepts of ‘differential susceptibility’ and ‘sensitivity to context’ have been advanced to explore the possibility that some children are more susceptible or sensitive to the influence of context, whether the context is adverse or beneficial.

Such children may also be differentially responsive to contextual protective factors. Further, they refer to “…great interest in models that examine the moderating influence of genes and personality on differential reactivity in the context of adversity” (Kim-Cohen & Gold, 2009). Contemporary research, particularly on the plasticity of adaptive functioning, is overturning some long-held assumptions about the enduring nature of individual traits, suggesting instead that many are ‘reprogrammable’ (Masten & Obradovi, 2006, p24).

A young person’s level of vulnerability is not only determined by the number of risk factors, but also the degree to which they are moderated by the influence of protective factors. Newman (2004) identifies that vulnerability renders a young person more susceptible to threat and affects their ability to cope and adapt. Fleming and Ledogar (2008) stress that when a young person is adequately supported and resourced, exposure to threats or challenges can be an opportunity for learning and personal growth. This has been described in early research into vulnerability and resilience as an inoculation or steeling effect (Garmezy, Masten & Tellegen, 1984; Rutter, 1985). So developmental problems could arise when children and young people are exposed to either not enough risk, or so much that it is impossible to overcome.

Masten (2009) draws on substantial evidence to identify basic adaptive systems that interact to foster and protect human development. Like people, these systems are not invulnerable and require nurturing. She writes:

“The greatest threats to young people occur when these key systems and the capacity they represent are damaged or destroyed and never restored. Nurturing, supporting, and restoring these fundamental adaptive systems for human development are top priorities for promoting competence or resilience in young people and preparing them to weather the storms of life” (p32).

Masten (2001) points out that it is most often the children and young people who contend with the greatest adversities that do not have the protections offered by adequate resources and social ‘scaffolding’ capable of regulating their exposure to risk. Collective efficacy has a crucial role in protecting and fostering personal efficacy and it is possible that undue emphasis on the individual reflects a cultural bias (Bandura, 2000, cited in Alkire, 2007; Christopher & Hickinbottom, 2008). Friedli (2009) argues that “…social  recognition and collective activity are frequent casualties of current economic and cultural trends” (p38).